Time is running out for you to upgrade for nothing

The main official Windows 10 free download offer ended on July 29 2016, with Microsoft laying down a cut off point to download and upgrade for nothing.

However, there were still a number of routes open to PC owners looking to download Windows 10 for free.

One of those Windows 10 free download options is the assistive technology route, which previously had no end date.

However, Microsoft recently announced that this upgrade offer will expire at the end of this year.

“Please take advantage of this offer before it expires on December 31, 2017.”

Microsoft did not specific what kind of assistive technology people would have to use to qualify for the Windows 10 free download.

So there is a potentially wide umbrella of people who could qualify for the scheme.

Assistive technology includes built-in features like Narrator and Magnifier as well as keyboard shortcuts and the on-screen keyboard.

You can still get a free Windows 10 upgrade

If you have a valid Windows 7. Windows 8 product key to enter into the Windows 10 installer.

This is an unofficial route that Microsoft has never acknowledged or talked about, and it’s surprising the option is still available to user.

Thurrott.com tested to see if an unused Windows 7 or Windows 8.1 product key can still be used to install Windows 10.

Thurrott went through step-by-step how to update to Windows 10 using the product key option.

Firstly, you need to download the Windows 10 Setup media which always provides the latest version of the Microsoft OS.

At the moment, this will be Windows 10 version 1709.  What is more commonly known as the recently released Fall Creators Update.

You will then be able to perform a clean install of the OS of any PC. And then you just have to activate it.

To do this, you can enter an unused retail Windows 7, Windows 8, or Windows 8.1 product key.

So it wouldn’t come as a shock if Microsoft do decide to disable it soon.

While Windows 10 is the latest Microsoft OS, it is not the most popular version of the operating system.

And there is all the more reason for people still running Windows XP, Windows 7 or Windows 8 to upgrade to Windows 10 as soon as possible.

It was recently revealed that Microsoft have been patching out security bugs in Windows 10 but NOT immediately rolling those out to Windows 7 and 8 users.

This lag in updates leaves potentially hundreds of millions computers at risk of an attack. 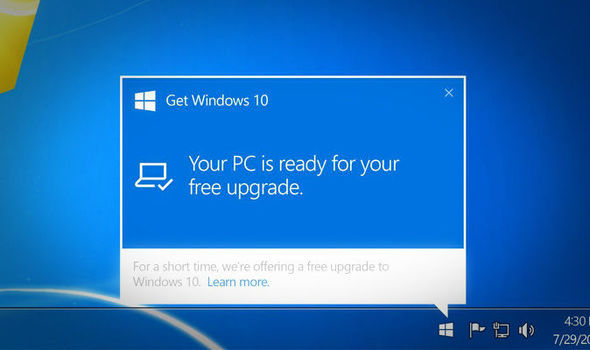 The exploits that hackers and malware are taking advantage of is being fixed in the big Windows 10 releases.

However, this is only slowly filtering back to Windows 7 and 8 in the form of monthly software updates.

The news was revealed by researchers on Google’s Project Zero team.

It’s feared cybercriminals comparing the various builds of Windows will notice these holes in earlier versions of Windows and take advantage of it.

Google Project Zero researcher Mateusz Jurczyk said. “Microsoft is known for introducing a number of structural security improvements and sometimes even ordinary bug fixes only to the most recent Windows platform.

“This creates a false sense of security for users of the older systems. And leaves them vulnerable to software flaws which can be detected merely by spotting subtle changes in the corresponding code in different versions of Windows.”

Windows 10 upgrade not showing up yet?

What’s The Most Recommended Tool For Unlocking A Windows PC?