Microsoft’s latest update to Windows 10 is here, and the first big news is the name change: What was known as Windows 10 Spring Creators Update has now officially been dubbed Windows 10 April 2018 Update. (Yes, really.) That may sound dull, but at least it tells you what version you’re running — before it was, “Which Spring update?” and you had to dig in the system settings to find the real information (like version 1703) for troubleshooting. Now it’s baked right into the name.

The Windows 10 April 2018 update includes. A new Timeline feature for recalling previous apps you were working on across machines, or even the ability to open your browsing history from Microsoft Edge for iOS and Android. Microsoft is also adding a new dictation feature, alongside an improved Focus Assist feature for silencing notifications. Microsoft’s Edge browser is also getting a mute tab feature with this update. And the company is refreshing its Xbox Game Bar with a new design.

Windows 10 now provides more granular, mobile-like flexibility in its do-not-disturb mode (called Focus Assist, a reworked version of Quiet Hours). And Microsoft’s finally rolling out the Timeline device-handoff feature that was announced a year ago, which is intended to replace the virtual desktop manager. There are also some notable changes in the settings, including privacy and security, notifications, password recovery and defaults. 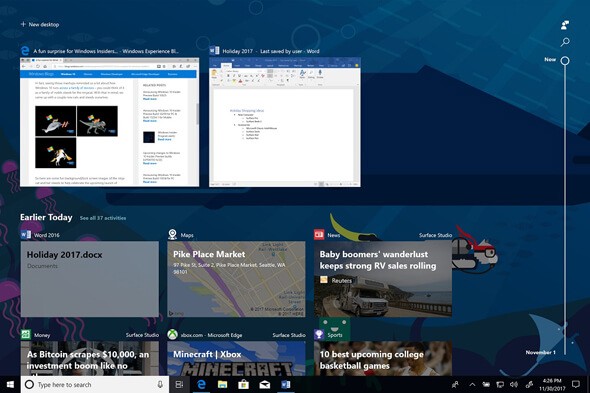 The Importance of Backing Up Your Data